Learn how Lufthansa Cargo achieved a problem rate of less than .2% while reducing testing efforts by 20%

Lufthansa Cargo serves more than 500 destinations worldwide with passenger and cargo aircraft as well as trucking services. Lufthansa Cargo is one of the leaders in the international air cargo industry and prides itself on high quality service. It owns and operates a fleet of 19 MD-11F aircraft, and charters other freight-carrying planes. Lufthansa Cargo has its main hub in Frankfurt, Germany with other hubs in Cologne, Munich and Sharjah. 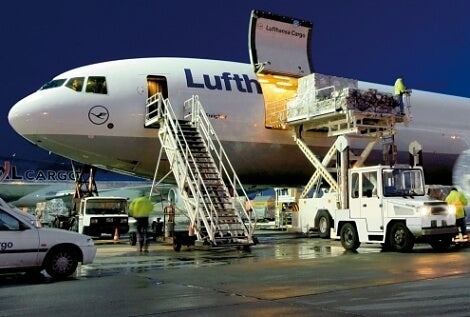 Ensuring the Reliability and Performance of Business-Critical Back-End Services

In instances of irregularities caused by inconsistent shipment data, they would experience additional costs due to extra handling efforts, additional work to correct accounting information, revenue loss, and poor feedback from customers.

With such critical factors in mind, Lufthansa Cargo determined that a well-tested Service- Oriented Architecture (SOA) was the best solution for its central shipment database. Lufthansa Cargo’s goals with the SDB project included improving shipment planning, loading processes, handling and accounting, and, most importantly, customer satisfaction and revenue gain.

Lufthansa Cargo ordered the development of SDB from Lufthansa Systems. However, functional and load testing is performed at Lufthansa Cargo with a core team of six business analysts and technical architects, headed by Project Manager, Michael Herrmann. Herrmann determined that he needed to develop central, stable, and optimal-performance services for different applications without affecting the front-end interfaces, which were already in place or currently under construction. Functional testing needed to be performed on services that were independent of a graphical user interface, along with their related test environments. The solution? Parasoft SOAtest.

Up and Running Quickly with Parasoft SOAtest

Parasoft SOAtest provided exactly what the SDB project team was looking for including the ability to create test cases automatically. What’s more, the SDB project team found the solution easy to understand and got up to speed quickly within just two to three days. Herrmann stated, “We received very good consulting and so the set up of the complete environment was easy for us — very helpful. And, the training was excellent, so it was easy for the team to understand and work with the solution.”

Commenting on the Parasoft SOAtest solution, Herrmann said, “We had excellent coverage with test cases. The quality was very good as we tested the stability of the services. We also made Parasoft’s load testing a core part of our test process. Since we had visibility into all of the issues in advance, the beginning of production was smooth. The problem rate we see in production now is less than 0.2%. Of that 0.2%, we know the issues and we know them before we go into production.”

Herrmann stated, “From a project perspective, this was a big success for us. It helped me achieve my targets. The biggest advantage for me is the efficiency of the test process now in operation. I was able to hand over a complete set of test cases to the operations organization where we used our ‘ten minutes regression test’. Ten minute regression testing would not be possible without this solution.”

Herrmann concluded, “The [Lufthansa Cargo] SDB project is now completed and Parasoft’s SOAtest solution was a critical success factor for the overall project. The solution enabled me to stick to my original plan and budget. Now, after seeing the excellent results of the project, I strongly believe that it would not have been possible to accomplish this level of high quality without Parasoft.”

View All Resources
Read Next Post "Static Analysis Tools: When Less Is More"